The shut-off valve for forced opening-closing 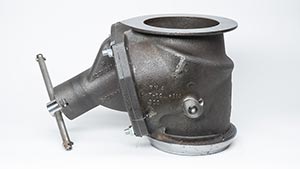 The shut-off valve for forced opening-closing is intended to modernise the universal drainage devices of railway tanks transporting oil and oil products by installing it as the first additional shut-off valve. During product design the comments and wishes of the personnel of the operating organizations of petroleum products supply (tank farms), loading / unloading racks and companies of tank owners were taken into account.

JSC "EIF "Sudotechnologia'' in a proactive manner, developed a shut-off valve for forced opening-closing. The design feature of the valve is the preservation of the working diameter of the drain nozzle of 200 mm, which allows the tank car to be decant of fuel with the third bolt (СТХЗ.492426.004) installed within the framework of the regulated time rates for the tank car with a universal drain device, and also provides for the possibility of introducing mechanized and automated devices during routine maintenance (flushing, steaming, degassing).

The design of the shut-off valve provides the ability to carry out all work on its maintenance without dismantling the valve. The frequency of maintenance and repair - in accordance with the regulations on the maintenance and repair of a tank-wagon. The valve has the ability to be sealed in the closed position. The design takes into account the peculiarities of the technological process of draining viscous oil products using existing circulating heating systems.

The question of using the СТХЗ.492426.004 valve in modernising of tank wagons was discussed at the 62nd meeting of the Rolling stock Commitee (September 13-15, 2016, in the city of Tikhvin). The appliance of the shutt-off valve СТХЗ.492426.004 produced by JSC "EIF "Sudotechnologia'' during modernization according to TS 3182-061-71390252-2011 “Equipment of tank cars for oil products with the third bolt of the universal drain device” was agreed.